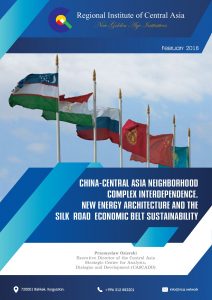 China as an assertive regional player is developing complex system of neighborhood interdependence that would facilitate its continuous economic growth. From this perspective Central Asian region could be seen as having core position in the system of complementary development based on the Western China Development Strategy and the Silk Road Economic Belt. The role of the region cannot be seen simply limited to the supplementary source of natural resources or part of the transport corridor. It shall be seen as integral part of the future matrix of interdependency. Such potential role could be especially identified in regional energy security architecture. China is an active player in the upstream petroleum industry in Central Asian countries. It is diversifying its energy supply with direct oil and gas import from the region by building transnational pipelines (the Kazakhstan–China oil pipeline, the Central Asia–China gas pipeline). Furthermore, China is also being increasingly involved in the downstream petroleum industry (e.g. the China Petrol Company Zhongda’s investment in the Petroleum Refinery “Zhongda” in Kara-Balta, or the construction of the petroleum refinery in Tokmok by the Xinjiang International Trade and Industry Company – both cities located in Kyrgyzstan).