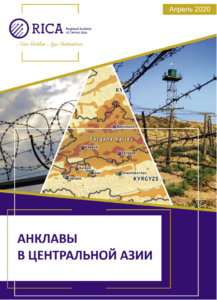 This paper analyses the terms “enclave” and “exclave” as used in international law, distinguishing the two from each other.
The historical and legal analysis of the establishment of borders between the former Soviet Republics during the national-territorial delimitation of Central Asia from 1924 to 1927 is summarized, the sources and problems of the formation of enclaves in Central Asia are investigated, and the author’s evaluation of this process is presented with recommendations.

Special attention is paid to the challenges of international legal registration of state land borders and their demarcation in the
modern history of Central Asia. Negotiations regarding the delimitation of state borders in Central Asia, specifically in reference to the exact borders between enclaves and their surrounding territories, have proven to be the most difficult procedure in this process, having lasted over 20 years.

Currently, enclaves are one of the main factors complicating the positive development of intergovernmental and interethnic
relations in the region. Most of the region’s border conflicts arise precisely in the areas where enclaves are located. An early solution to the problems related to these enclaves will contribute to the establishment of a stable state border situation and to the improvement of interstate relations in Central Asia.

The results of this research may inspire interest in university students, as well as graduate students and experts studying the problems of national and regional security in Central Asia.

The Kyrgyz Republic in the Eurasian Economic Union